The fundamental thesis of the Communist Party of the Soviet Union was the expression: “The CPSU exists for people and serves people”, and according to Article 8, working teams were obliged to bring up their members in the spirit of Communism. The list of rights and freedoms of nationals was extended; rights for protection of health and housing appeared. The social homogeneity, strengthening of moral and political unity of social groups and layers of the society, establishment of the new historical unity of people, the Soviet people, was announced. According to the Constitution, the scientific Communism and Marx/Lenin theory was announced the official ideology, and the ultimate public development goal, building up the class-free Communist society. The arrangement of the governmental power was based on the principle of superiority of Soviets, and the state was announced as the main instrument of building up Socialism and Communism. The priority of governmental interests over personal interests and human rights was set out. In addition, this constitution substantiated the “military assistance” to neighboring countries.

The Brezhnev Constitution was a step towards a state of law; it approximated law to the customs of court practice and the notions of social legality and proletarian internationalism that reigned in the USSR then. At the stage of discussion, the draft Brezhnev Constitution was strongly criticized but official media did not cover the draft in the stagnation era: critical publications were distributed in self-published booklets only.

In 1990, in the restructuring period, major amendments to the USSR Constitution of 1977 were adopted. This gave reason to speak about replacement of the Brezhnev Constitution with the Gorbachev’s one. 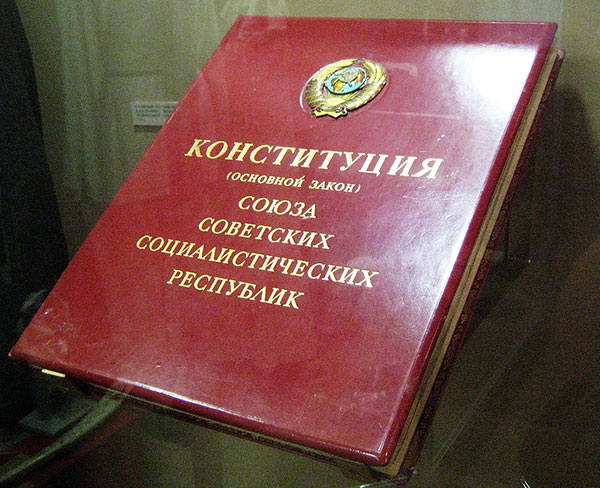