Late in the evening, on the eve of the Day of the Russian Constitution, our correspondent posed questions to the Chairman of the Presidium of the National Union of Calligraphers Petr Chobitko about the handwritten Constitution of the Russian Federation.

— Mr. Chobitko, in your opinion, what was the reason to write the Constitution of Russia by hand? What is the significance of this project?

— When realizing the grandiose project “International exhibition of calligraphy” we came to an idea of a national scale: in the 300th anniversary of the civil script we wish to restore the lost art of calligraphy in Russia. For this we needed the “center” or the “heart” of the project, so we decided to take the Constitution of the Russian Federation as the center. The Constitution is to become the symbol of Russia’s rebirth, because only a few countries in the world are able to keep and maintain such a fine art as calligraphy. We can do it and this proves our spiritual and cultural potential, and clearly speaks about our possibilities.

— How long have you been working on the handwritten basic law of our country?

— We were working in several steps. It took us about seven months, from May to November. The first step, and the most important, was to create a special handwriting script. It took a lot of work to decide on a form that would combine traditional and contemporary requirements. We wished people knew and understood it was a real handwritten text, and not made on a computer. The second step was marked by the direct cooperation with the designers from the “Rare books from St.Petersburg” publishing house. During this stage we worked out the composition and proportions of the page and text on the page. From this point we started to write the text of the Constitution. But before all the text was analyzed by the corrector, we lined the page, and only after that I could write. The last pages were written and sent to the project organizers on November 10th. And the very last pages I had to rewrite three times.

— How did you choose this script and what is the peculiarity of it?

— I’ve been working with handwritten text for many years already, for 36 years, to be exact. Of course, I used my experience. As you may know I was working on many important documents, diplomas, etc., so this really helped me. For a long time I was thinking about a form of the script to be used for Russian documents. Certainly, I had some ideas and developments. You know, I have recently published my book titled “ABC of the ancient Russian script” which helped me greatly while designing the script for the Constitution. I always thought about how the reader would see and perceive the text, how he would understand it. And I think that was the main difficulty, because the text should be clear and understandable to everyone.

— Could you describe the script, its characteristics?

— If speaking about a letter I could say that the broadness of the pen greatly influences the perception of the symbol. Sometimes a script is so beautiful that it looks like a herb and it is very thin, and sometimes it can be dense. Before you start working you should find the balanced form to avoid small defects. The letter should be monumental and reserved, but at the same time it has to be varied, otherwise the letter would be dull. That is why we had to change details in the process of writing. Some letters were added by decorative elements, because calligraphy is not a literature story, so we had to make it warmer and cozy. The most difficult thing was to keep the balance.

— What other obstacles did you meet while writing your Constitution?

—  There were lots of difficulties and they were quite different. They were physical and psychological, and even moral obstacles. First of all, I wanted to write the Constitution far from the everyday routine, somewhere in a quiet cell in a monastery. I found such a place and I even made a deal with the priest, but it happened so that I didn’t have the chance to do my work in that cell. At the same time, we had to face many other problems. We were preparing the International exhibition of calligraphy, and I as the Chairman of presidium of the National Union of Calligraphers had to settle organizational questions. I clearly realized that in such a hurry I was losing the balance of my script. It was really hard.

— What instruments did you use?

— Well, I planned to write with feather pens. But when I started writing I understood that contemporary paper differs greatly from that our ancestors used. The feathers were breaking and I had to change them time and time again. Slowly I decided to use the metal pens, but I had to upgrade them, because a pen is like your arm, we need to write comfortably. But even metal pens were not safe enough, so not a pen with which I started to write stayed until the end.

— What paper did you use?

— the Constitution of the Russian Federation is written on Italian hand-made paper “Tintoretto”, that has a smooth warm colour. It is practically identical to the ancient samples of paper.

— I see, it was really hard. Did you have any assistants?

— In the very beginning I was assisted by a very good designer Mikhail Kopylkov who helped me design the page, measure and line the paper. Then, my students did their best to help me. But not everyone was able to work under the pressure and finally only Denis Lotarev, a student of the State academic institute of painting, sculpture and architecture n.a. Ilya Repin, stayed with me. 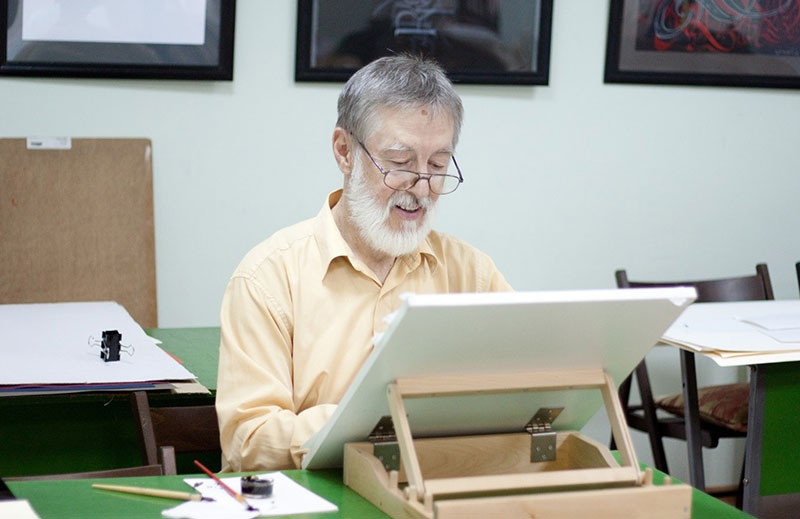